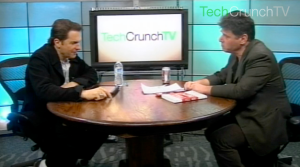 Yesterday, movie, music and sports mogul Peter Guber told me why there’s no business without story business. In the instant best-selling Tell To Win: Connect, Persuade, and Triumph with the Hidden Power of Story, his new book released today, Guber urges everyone to unleash the power of story.

Today, Guber’s attention shifts from the power of storytelling to the future of the entertainment industry. And in keeping with his ferociously infectious optimism, Guber believes that the future of the entertainment business shines brightly. The idea that the music or movie industry is dead, for example, he describes as “ludicrous” – even though he is very insistent that we, as consumers, have a moral obligation to pay for our content rather than steal it.

Guber’s optimism lies with our cellphones – which he says are one of the two most valuable things we carry around with us (the other being our heart). All entertainment, he promised me when he came into the TechCrunch studio last month – from live sports to movies to online music – is about to become location based. The best, what he calls “the third act,” is yet to come – both in his own life and in America. That is Peter Guber’s story – merging the power of “the state-of-the-heart technology of storytelling” with state-of-the-art technology.

Guber on our hearts and our cellphones

Guber on why we should pay for our music