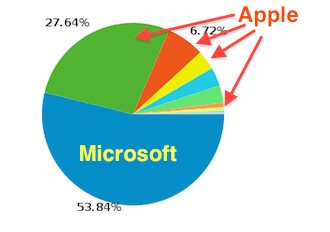 The writing is on the wall.

Look at those numbers again for a second. In four years, Windows share among TechCrunch readers has fallen 30 percentage points. That’s incredible.

The knee-jerk reaction in the comment section will likely be something like “it’s because you guys cover Apple so much”. But the fact of the matter is that Macintosh share, after rising for three of those four years, fell last year as well. It’s the mobile devices — specifically the iPhone, iPad, and Android devices — that are eating away at Windows.

In fact, if the trend over the past four years continues at about the same pace, in two years, devices made by Apple (Macs, iPhones, iPod touches, and iPads) will surpass devices that run Windows as the top visitors to TechCrunch. And depending on how popular the iPad 2, iPhone 5, and OS X Lion are, it could easily happen next year.

Here are the broken down numbers:

While even the last batch of stats shows that Windows still has a nice cushion over number two, Mac, if you add the Apple products put together, it’s a different story.

In the four year span, Apple has added 25 percentage points to their share among TechCrunch readers. That nearly all of the 30 percentage points that Windows lost in that same span (Android’s growth pretty much fills in the rest).

So it currently stands at Microsoft’s 53.84 percent versus Apple’s 38.42 percent. Again, a big year for iPad, iPhone, and Mac could mean a changing of the guard as soon as next year. But unless something drastic changes, you can be sure that Apple will be dominant among TechCrunch readers in two years.

The latest rumors have Windows 8 showing up sometime in mid/late 2012. But the fact of the matter is that Windows 7, much more widely praised than the disaster that was Vista, hasn’t helped Microsoft buck this trend among our readers. Perhaps they’re only hope of gaining back share at this point is Windows Phone. So far, that hasn’t been going too well. Nokia should help that, but will it be enough to offset the Windows losses?

Humorously, Microsoft’s best hope for not falling to Apple may well be Android. If Google’s platform continues to make gains, it could prolong Apple passing Microsoft.

But again, Apple has iPhone 5, iPad 2, and OS X Lion on the immediate horizon — all within the next few months. And then there’s the very real possibility of another iPad in the fall.

The iPad 2 and iPhone 5 are likely to push the Apple share forward immediately. But don’t sleep on OS X Lion either. The early indications are that Apple has indeed made it much more iOS-like. That means millions of iPad/iPhone/iPod touch owners who have traditionally been PC users, are going to feel a lot more comfortable on a Mac than ever before.

And a new PC-to-Mac data migration system built in to Lion will only help that.

OS X Lion is going to feed off of iOS users, and vice versa. And the Mac ecosystem is going to continue to expand. Just as happened in the browser world with Chrome taking over, a transition is happening among TechCrunch readers in the ecosystem space. The numbers don’t lie. And Microsoft better pray that our readers aren’t leading indicators of overall trends in the space — which is exactly what you have been in the past.