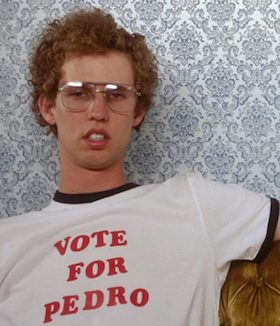 I love Kickstarter. It’s maybe the best enabler site ever. In the short time it has been around, we’ve gotten everything from open source Facebook “killers” to iPod nano watches to RoboCop Statues. But one of the aspects of the service with the most potential is movie funding. A few of these projects have popped up already, and it apparently caught the eye of Napoleon Dynamite himself, Jon Heder.

As NewTeeVee points out today, Heder has set up a project on the service to get funding for a movie he hopes to make. Alongside collaborator Nick Peterson (who would direct the film), he hopes to raise $27,000 over the next month or so. Given the fact that he’s well, Napoleon Dynamite, he should blow past that in no time. I mean, the iPod nano watch got almost a million in funding.

If you watch the video they put on their Kickstarter page, you’ll see that the duo hopes to make a half animated/half live-action short film about dripping filth, or something. And while you have to assume that Heder could easily just pay for this out of pocket, it’s interesting that he’s crowd-sourcing the funding.

You can pledge as little as $1 to help out, but if you’re a high-roller and give them $10, you’ll get your name in the credits. Even better, if you pledge just $250, you’ll get an associate producer credit! As anyone in Hollywood would tell you, that’s a total BS credit, but still! The real killer option is for $5,000 or more, you get a full producer credit, a private screening of the film with Heder and Peterson in LA, and everything else they’re offering others (HD copies of the movie, etc).

Wait for it…. lucky!