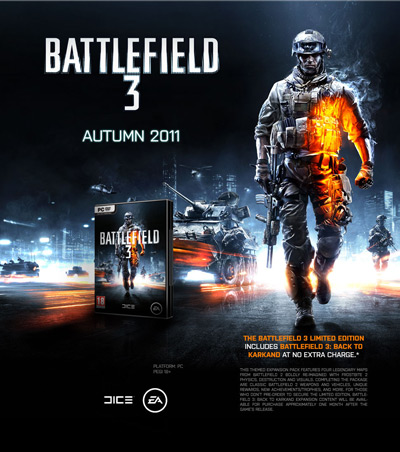 Battlefield 3 doesn’t even have a release date yet, but EA has already started talking about DLC. Sigh. It’s a bit disappointing: so many of us here (well, me, Matt, and Devin) are genuinely looking forward to the game, and we’re already being teased with offers of almighty DLC. It’s so unsettling.

In any event, the first bit of DLC will be called Back to Kirland, the existence of which was confirmed two days ago. In the past few hours an EA community manager has confirmed exactly what maps will be included in the DLC.

Keep in mind that Dice, the games’ developer, told Game Informer that it “learned [its] lesson” with regard to DLC, saying that it’ll release more DLC for Battlefield 3 than it did with Battlefield Bad Company 2. Oh boy.

I now leave you with the Battlefield 3 teaser trailer.