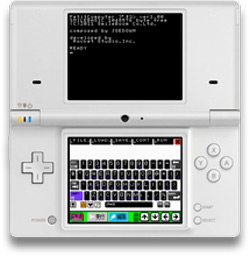 A new DSiWare title gives users the ability to create computer programs using the BASIC programming language. Not only can users create their own programs, but it also comes pre-loaded with a few simple games that demonstrate the raw power of the language.

Oh: the name. It’s called Petit Computer, and it’ll be released in Japan on March 9.

It works as you’d expect: the touchscreen serves as a virtual keyboard, and then you use the stylus to input code.

The pre-loaded games include a Pac-Man clone, a shooting game (which is probably no worse than Black Ops), and an RPG.