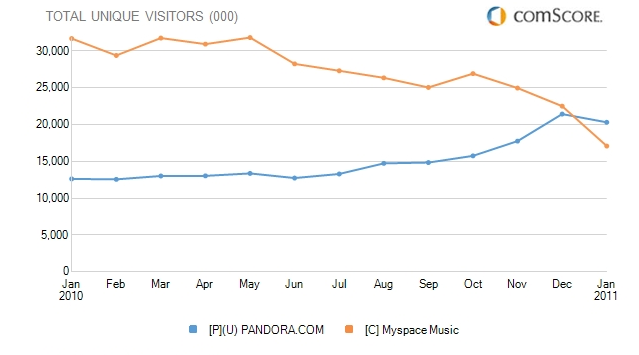 Remember MySpace Music? It was supposed to put online music streaming on the the right track. But with all the layoffs, shrinking audience and turmoil at parent MySpace, MySpace Music is singing the blues. According to comScore, only 17 million people in the U.S. visited MySpace Music in January, 2011, which is down 46 percent from the previous year. Pandora is now bigger on the Web, with an estimated 20.3 million monthly U.S. visitors.

Today, MySpace Music president Courtney Holt is stepping down. He joined two years ago from MTV. But with MySpace itself on the wane and Rupert Murdoch looking to unload it, MySpace Music can no longer hold its own.

Below is the internal MySpace email Mike Jones sent to employees announcing Holt’s departure. No replacement was named, instead Jones will be adding MySpace Music to his responsibilities.

Sam Wick will now oversee all of marketing for Myspace and operationally I will be taking over as the interim president of Myspace Music.

Please let me know if you have any questions about these changes.