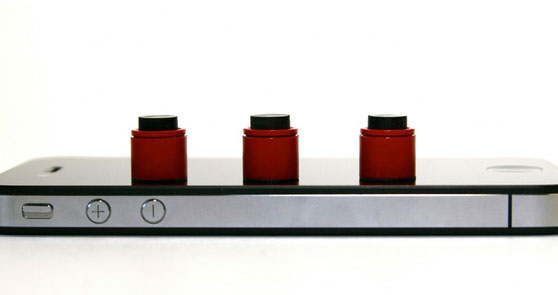 The iPhone is great for gaming… in some ways. The App Store as a distribution model? Fantastic. The finely-tuned development platform? Amazing! The lack of even a single physical face button beyond the one that exits the application? Ehhh, not so great.

While most game developers have learned to make do in this frightfully buttonless world, there are some ideas that simply require buttons. This has lead to a rather staggering number of games that draw their controls onto the touchscreen — which, for anyone who witnessed the control pad’s evolution from the palm-destroying corners of the NES to the pampering curves of today’s consoles, is a fairly terrifying idea. Playing a fighter game on a slab of tactility-free glass? No thanks.

Enter Joystickers’ Classics — they’re removable, reusable, arcade-style buttons built to give the iPhone (or just about any touchscreen device) that little bit of extra game.

So, how do they work? You take your iPhone, and boot up your favorite game that makes use of onscreen buttons. Slap one of these buttons on top of the onscreen button you’re looking to replace, push down, and bam! The Classic should hold in place thanks to a “special micro-suction cup material imported from Japan”, which they’re promising should stick and re-stick without leaving a mark.

Sadly — and contrary to what the “Joystickers” name might imply (get it? Joystick.. stickers?) — it seems that they’ve yet to come up with such a workaround for a Directional Control/D-Pad equivalent. In other words, even if you snatch these up and put’em all over the buttons, your other thumb will be left swimmin’ in a sea of glass for any of the directional input stuff that the game may involve.

Like so many of the crazy concepts we’ve been writing up lately, these buttons are part of a crowd-funded Kickstarter project. They’re trying to raise $25,000 to get the project off the ground, most of which they say will go toward funding the “prohibitively expensive” costs of injection molding.