It isn’t often that you hear about a startup that’s remained in stealth through multiple multi-million funding rounds. But today, we’re meeting a company called Transphorm that’s done just that — and it’s making its debut in style. The company has just closed a $20 million Series C funding round led by Google Ventures, with participation from existing investors Kleiner Perkins Caufield & Byers, Foundation Capital, and Lux Capital. This brings the company’s total funding to $38 million since it was founded in 2007.

So what exactly does Transphorm do? The startup is focused on improving energy efficiency, namely in making power conversion less wasteful. CEO Umesh Mishra says that right now, we lose around 10% of the total electricity in the United States to energy conversions — when energy is converted from one form to another. If we could conserve and use that energy, he says we’d be saving more energy than is conserved by alternative sources like wind and solar (see chart). This would lead to billions of dollars in energy savings (the company estimates $40 billion a year in the US alone) and it’s obviously better for the environment, too. 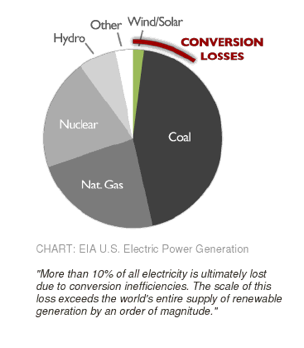 Transphorm’s products are focused on high-voltage situations and are built around gallium nitride instead of the industry standard silicon, which Mishra says has reached its limit in terms of high-voltage energy efficiency. Their customers will initially include operators of data servers, telecommunications companies, and other big consumers of power, but Mishra says that the technology could be used to conserve energy in every machine (including the power brick that comes with your laptop).

Mishra says that Transphorm will have products available starting this year, with plans to ramp up production through 2012 and 2013. The company isn’t announcing how much its products will cost, though it is in discussions with potential customers about pricing.

Transphorm’s team of “well over 50” (Mishra declined to be more specific) is based in Goleta, CA — near Santa Barbara, where much of the research being done on gallium nitride takes place.