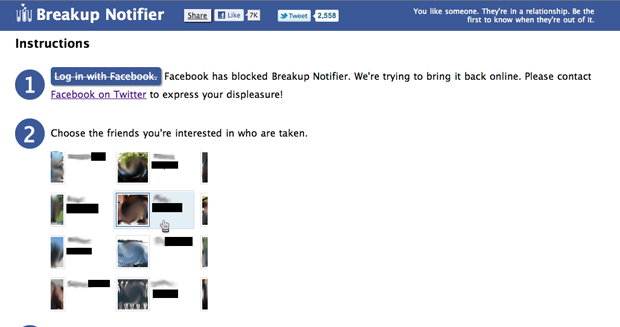 Just Monday we were writing about Breakup Notifier, a Facebook app that raked in more than 100,000 users in less than 24 hours and as of 5 hours ago had a more than modest 3,673,484 users in its database … And then poof! It’s gone, blocked by Facebook.

To the uninitiated, Breakup Notifier sent you a helpful email notifying you whenever the object of your affection changed their relationship status. This is not the first cool app Facebook has had issues with this week, it also partially blocked the Dutch anti-smoking app Blackmail Yourself yesterday.

Breakup Notifier creator Dan Loewenherz received the following message from Facebook at 4:38 am PST this morning. It seems like Facebook took issue with the app’s large number of API calls, which might just be a record:

“To ensure positive user experiences on Platform, we run routine automated screens that take user feedback, machine learning and various algorithms into account and remove spammy applications. For example, if an application is making an inordinate number of stream.publish calls and receiving a large number of user reports, it may be removed by our automated systems to protect the user experience and the Platform ecosystem.”

Loewenherz has contacted Facebook with no response yet, as have we. He says that he’ll do whatever Facebook needs to get the app back up and running “We’re willing to comply with whatever they want us to (within reason).” Facebook has also, inexplicably, disabled his personal account.

Update: A Facebook spokesperson has given us the following statement clarifying the extent of the Blackmail Yourself blockage and explaining that it is also currently looking into what happened with Breakup Notifier:

“We have automated systems in place to ensure apps on Facebook Platform provide a positive user experience, and we’re currently looking into the issue with “Breakup Notifier”. Additionally, we did not block the “Blackmail Yourself” app. Some features were temporarily disabled this week as we worked with the developer to ensure the app complied with all of our policies, but it has been and continues to be accessible.”