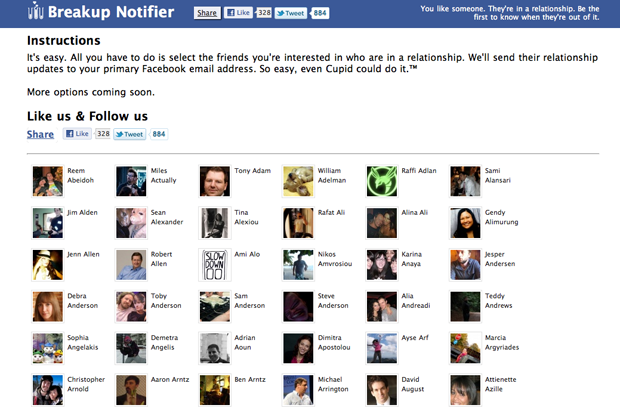 “Zuckerberg sometimes amused himself by conducting experiments. For instance, he concluded that by examining friend relationships and communications patterns he could determine with about 33 percent accuracy who a user was going to be in a relationship with a week from now. To deduce this he studied who was looking which profiles, who your friends were friends with, and who was newly single, among other indicators.”

Dan Loewenherz was sitting up one night with fiance and his mom, trying to conjure up a guy to set up with his fiance’s sister. They finally came up with the perfect guy, enthusiastically checked the guy’s Facebook profile and to much disappointment, saw that he was in a relationship. I know this has happened to you: You meet a great guy or girl, immediately run to Facebook or Google to Internet stalk them and find out that they’re spoken for. Boo.

Well, Lowenherz put his programming skills to good use, and spent four hours that night creating the Breakup Notifier, which, similar to Break Up Alert, eliminates the Carpal Tunnel involved with constantly refreshing the object of your affection’s Facebook page for news about their sexual availability.

Breakup Notifier sends you the below email whenever your selected targets change their relationship status. All you have to do is go to BreakupNotifier.com and choose the friends you want to digitally declare that you regularly stalk. (There is no exit page, so simply select the friends and the app does the rest. Also, it obviously does not share this information with the person in question, but provide this data at your own risk.)

Breakup Notifier is great for when you don’t actually talk to the person you want to hook up with because you’re a big nerd. The app now crawls Facebook every ten minutes, so you get up to the minute coverage of other people’s relationship misfortunes and can jump in while they’re still vulnerable. It’s called a rebound for a reason.

In the same vein, Lowenhertz has purchased unfriendnotifier.com and areweenemiesyet.com to set up un-friending notifications as well, which are a bit more challenging. He’s thinking of charging something like 99 cents for early adopters and then bumping the price up to $4.99 sometime afterwards. So get in while it’s cheap/free!

And if this planned subscription model doesn’t pan out, Lowenherz should totally set up a freemium deal and have hot guys or girls “Poking” and “Liking” stuff on the target’s profile, you know, to help speed up the breakup.