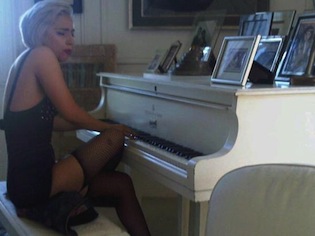 Last night at the dinner table we wrestled with the next generation in the form of our 17 year old. It all began when she asked to borrow my iPad for “a second.” We had been discussing Lady Gaga’s new single, which Naomi insisted was a direct cop of a Madonna 80’s hit, Express Yourself. OK, there might be some similarity — like the whole verse, 75% of the chorus, and the fact that Lady Gaga is in fact Madonna.

But I maintain that Lady Gaga is the first and only artist to appear since the Beatles were thrown off the rooftop in London with sufficient gravitas to allude endlessly to in articles about technology. So I did the adult thing to do in this parenting opportunity. I distracted my daughter and grabbed my iPad back. Things got worse fast.

Background: everybody in our house has an iPad of their own. Since the kids got their iPads I have never seen them be used. All questions are now adjudicated by “borrowing” the closest iPad which is invariably mine. Google is always used, which is why Android will never run out of subsidy money. I also believe that my daughter’s friends have infiltrated Wikipedia and rewritten all the answers to support pointless arguments they gin up at the dinner table.

Within seconds Naomi was back with her own iPad. I had taken the moments she was away to download Born This Way and two new iTunes special releases from the remixed Beatles Love album, Girl and Fool on the Hill. My desperate logic was that I could use the Love remixes, which took elements of original session recordings to refashion new versions of songs, to illustrate how all pop songs are based on the same three cords, or in the case of Born This Way and Express Yourself one chord or two tops.

But my daughter was way ahead of me (you think?). Dad, she asked using the formal Dad instead of the silent sneer, Dad, is this how I play this song on the stereo? She was pointing to the little icon to the right of the volume control in iTunes, the one that only appears when you are in Landscape mode as she quickly told her little sister. Suddenly I realized she was about to take my Airplay home theater control away. Yes, each of the four iPads now could push their selection up to the big speakers. Express Yourself now boomed throughout the house.

You see, this iPad virus is self-replicating. The horror of it is that my kids are using it to actually learn more about the technology than I can keep up with. Now Ella was displaying her photos on the Sony while Naomi was DJing her music. The two of them were singing along with some ex-Disney rehab star and my wife was hunting down a Simon and Garfunkel live concert I’d given her a few years ago in lieu of actually writing out a Valentine’s day card. I pathetically played a track from the last Little Feat record, selected because it was six minutes plus long and supported one of my interminable war stories about having been at the session for a David Sanborn overdub. This actually worked, because Naomi could only take three minutes of it and retreated to her lab for more hacking. I take solace from the knowledge that she was Born This Way.

Now it’s Sunday morning and I’m ten minutes past my deadline. The house is quiet as I scan the Times on the iPad. Techmeme is sprinkled with the usual mix of Apple and social stories. Twitter is stomping on its developer community and all is right with the world. The Fool on the Hill sees the sun going down and the eyes in his head see the world spinning ’round.