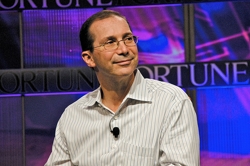 I just got off the phone with UberMedia CEO and Idealab founder Bill Gross on the heels of Twitter’s suspension of two of UberMedia’s products, UberTwitter and Twidroyd, for violating Twitter’s API rules. The violations in question concern trademark, privacy, and monetization.

Gross tells me, “We just talked to Twitter and discussed the various issues they raise. It took us by surprise because they didn’t raise them before. We started making the changes”

UberTwitter will change its name to UberSocial. The privacy issues are related to handling Tweets longer than 140 characters. And the monetization issue, Gross believes, has to do with Twitter’s belief that UberMedia is using affiliate links, which he says it is not. But he is eager to comply with Twitter’s requests and be back in its good graces. “Whatever it is we will change it,” he says.

Gross says that he spoke to Twitter to better understand what the issues were and he is “comforted by the fact” that an executive there told him that if he gets UberMedia’s products back into compliance, Twitter will reinstate them. So what message is Twitter trying to send by going after such a big member of the Twitter eco-system in such a public way? “I think that what Twitter is saying is we really, really want you to comply with the terms of service.” Uh-huh.