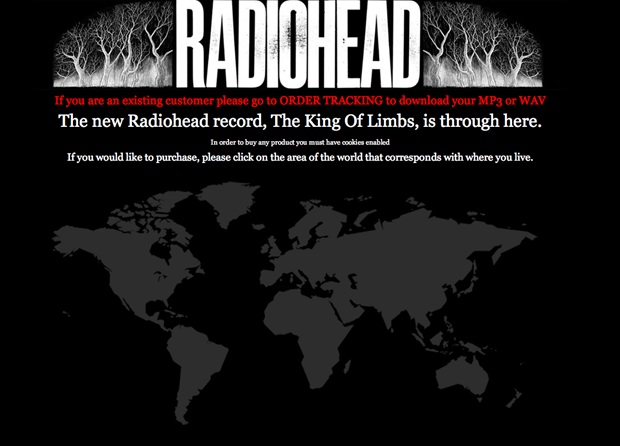 It’s as if Radiohead got the lion’s share of Internet awareness, leaving the rest of the music industry completely clueless. Pretty much all anyone can talk about right now is Radiohead’s The King of Limbs, for a number of reasons (not least of which is because it’s amazing) but primarily because Radiohead mirrored the patterns of digital album leaks, generating major buzz.

On the Internet everyone expects everything a day early.

The band surprised everyone this morning by tweeting out “It’s Friday… It’s almost the weekend…You can download ‘The King of Limbs’ now if you so wish,” which led to coverage from Pitchfork to tech blogs , over 2000 retweets and #thekingoflimbs hashtag surpassing Queen Gaga to an impressive position at the top of Twitter trending topics. Radiohead frontman Thom Yorke is also trending.

The Rolling Stone explains the um, premature release “They chose to push up the release because everything was ready on their website and so, hey, why not?.”

Having primed the digital sales pot with”the pay what you will” model of 2007 release In Rainbows, which “sold” 3 million copies, this time fans have to pony up a fixed amount of cash, $9.00 for MP3s and $14.00 for higher quality WAV files. Further driving in the nail in the coffin of physical music sales, Radiohead is releasing what it is calling a “Newspaper Album” three months from now which will include 625 pages of artwork, a MP3 ($48) or WAV ($53) version of the album and two, 10-inch vinyls — More a collector’s item than anything else.

The album is backed by TBD Records in North America, Hostess Entertainment in Asia and XL records in the United Kingdom.

In testament to the times we live in, already there are three torrents of the album up on file-sharing service The Pirate Bay. But, in a glimmer of hope for the burgeoning online music industry, one reads “This is for your consideration only. If you like it, buy it. http://www.thekingoflimbs.com/”

Watch the video for ‘Lotus Flower’ below.