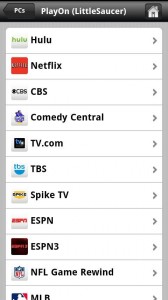 Given what Netflix has said so far, we know that Netflix for Android is coming… eventually. Even then, Netflix is still being a bit mysterious about which devices it’ll work on (though given their recent Qualcomm partnership, “things running a Snapdragon CPU” is a good guess.)

In the meantime, there’s a work around of sorts: PlayOn. After months of beta testing, PlayOn for Android is now available.

You can find the now Beta-tag-less app in the Android Market right here.