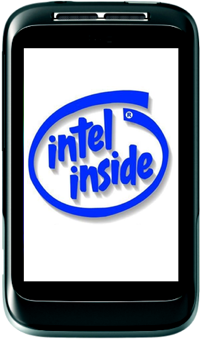 This year at MWC is really dominated by ARM-based devices, but that level of ascendancy can only be maintained for so long. Intel is a juggernaut in the PC world; could it successfully punch its way into mobile? CEO Paul Otellini sure thinks so, and just a short while ago confirmed that after years of rumors, we’d be seeing Intel-based handsets in 2011.

He wouldn’t be more specific, so we’re left to wonder, but a little investigation over the next few months might reveal who might be leaving ARM behind. Of course, Nvidia wants a piece of the pie, too, so anyone who looks like they might be jumping ship could also be going in that direction. But perhaps Intel is looking to break in with its traditional PC partners like HP and Acer.

ARM’s CEO just yesterday disparaged Intel’s attempts to go mobile, saying Intel is “still a long way apart in processors on the market. Unless they can make their processors smaller they will struggle.” Who knows what Intel has going on in their skunk works? We’ll keep our ears open for further developments.