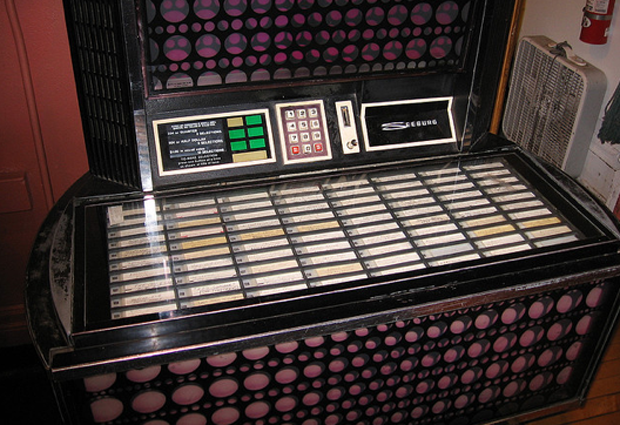 Something unusual happened last Friday night at Bar Basic here in San Francisco. When I walked in, the entire room was fixated on on a screen above the bar, which displayed what looked like a musical game but wasn’t karaoke. The game? Roqbot, a unique iPhone app that allows you to yes, pick the music playing at a bar. Like a combination Pandora and traditional jukebox, Roqbot allows you to control the tunes without getting up from where you’re sitting.

The inspiration for Roqbot came when one of the co-founders got frustrated using the jukebox at a bowling alley — Every time he had to walk across the bowling alley he would miss his turn. Roqbot, which shares the space with jukebox networks TouchTunes and eCast, is the first startup that I’ve seen experimenting with bringing social music to real life businesses like bars and cafes. Up until now plenty of people have deployed this concept for private settings, but no one has touched public because of the many challenges involved. 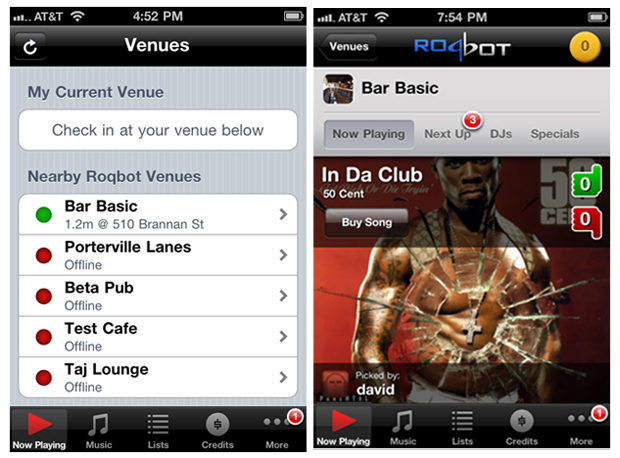 Co-founder Garrett Dodge says Roqbot isn’t actually competing with jukeboxes, but with iPods. Playing an iPod at a cafe or a bar has its disadvantages, namely that the staff gets tired of listening to the same music day in and day out (anyone who has ever worked in a store knows how hellish this can be around Christmas-time) and that customer requests are never heard. There is also the legal issue of music licensing fees when playing personal music in a public setting.

With Roqbot you can check in at a participating venue as well as publish your checkins and music picks to Twitter, Foursquare, Last.fm and Facebook. You can select a song to play using Roqbot credits that you can buy with Amazon, Paypal or your Credit Card through your phone. The app offers you a comprehensive list of popular music to choose from, including some that will please the cranky indie music snob you’ve dragged along. If you’re having trouble deciding what to play you can pick from curated lists like “Highest Rated of all time,” “Most Played of All Time” and yes “Top 80s.”

Participating venues have their own dashboards within the app and aspiring DJs can navigate through “Now Playing” “Next Up” “DJs” and “Specials” homescreens. On the “Next Up” screen, a Digg-like interface allows you to thumb up and thumb down songs, increasing or decreasing people’s DJ ratings with each vote (and it gets heated). Likewise people can vote your picks up or down, which affects your own DJ rating as well as your position in line. For extra Roqbot credits you can set your musical picks to “Priority Pick” which moves them up in the queue.

“We’re going beyond checking into a venue,” says founder Garrett Dodge, “Now you can actually checkin and do something useful.” True. Roqbot also gives away all the equipment for free to venues, including the entire catalogue of five million fully-licensed songs (one of the co-founders has a background in IP law and one of their advisors used to be the CEO of Sony Music).

The Roqbot beta can be downloaded from the iPhone, but can only be used at Bar Basic in San Francisco which I highly suggest if you’re in the area. Dodge plans on launching the alpha for both the Android and iPhone platform in March, offering it for free to people planning parties at SXSW. Roqbot is currently bootstrapped.