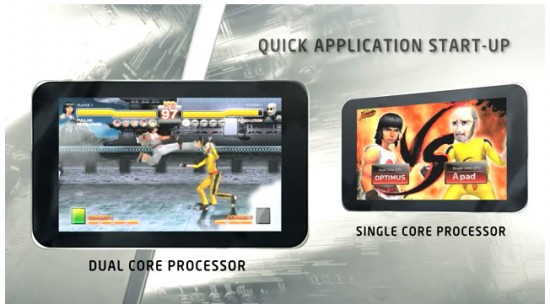 In the FACE! Nevermind the man is recovering from cancer, LG just kicked Steve Jobs’ in the face. Really. Well, virtually at least. But it still counts!

At the 1:00 mark in the official Optimus Pad promo video, there’s a not-so-quick segment that shows Spec Fighter, a take on Street Fighter, where the Optimus Pad fights the “A pad” whose virtual fighter’s likeness is quite similar to Steve’s. You know, the greying beard, balding head, and wire-frame glasses hiding his kind eyes. At least the video wasn’t a Mortal Kombat clone complete with the Finish Him! moves. No, ol’ Jobs just gets a foot to the face Anderson Silva-style. The video is harmless, but will no doubt cause the Apple loyalists to rise up in the name of their leader. Click through for the action.