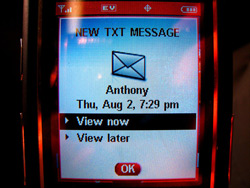 Don’t tell Twitter’s Dick Costolo, but it seems everyday users are completely content with the ability to SMS their friends. So says a recent Deloitte study , which found that 90 percent of smartphone users send at least one text message per day. Compare that to only 40 percent of smartphone users who “hit up” their social networks, including Twitter and Facebook, at least once per day. In other words, reports of the text message’s demise have been grossly exaggerated.

All of this is on the same day that Dick Costolo, the Twitter chief operating officer, said at the Mobile World Congress, in Barcelona, that he envisions a world in which Twitter is available for every platform, for every device, and for every person.

The Deloitte study says that plain ol’ text messages are still so popular because they’re “more immediate and more personal.” (Costolo actually alluded to that in his MWC presentation, saying that Twitter needed to become more ubiquitous — you shouldn’t have to launch a separate application to tweet your friends.) That text messaging is so profitable to wireless providers appears to be a happy accident, seeing as they were initially developed as a service to the hearing impaired.