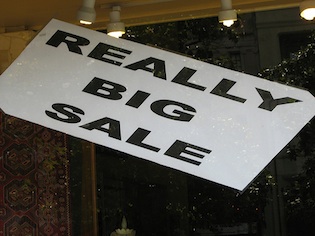 I assume that “sale!” signs in retail businesses are usually just BS. The stores keep normal prices higher than they should be so they can offer customers a faux discount. Whether it’s always true or just often true doesn’t matter. People don’t really get all that excited about signs that say “HUGE SALE 50% OFF” or whatever. We’re desensitized to it.

Groupon has been different, though. They’ve had real discounts, verifiably way below normal retail costs. That’s why so many tens of millions of people look forward to their Groupon email every day, and why so many people sign up for skydiving lessons that they never knew they wanted.

There are signs, though, that the model may not scale infinitely forever. Beyond just common sense, I mean. Some merchants have failed to take the coupons they’ve already sold on Groupon when they saw the overwhelming volume it brought in, for example.

Groupon seems to do a very good job of returning money to unhappy customers in those situations. And by doing that they’ve kept their brand strong and synonymous with getting genuine good deals. 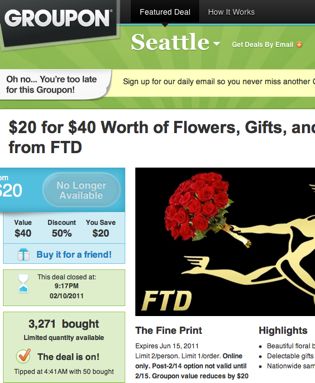 Groupon offered users throughout the U.S. a $20 off coupon for Valentines Day flowers from FTD. People who bought the coupon had to use a special URL to purchase the flowers. And then they were shown a regular price for the flowers of $50 before the $20 coupon.

Which is fine except that the regular FTD site shows a price of $40 for the same item, meaning Groupon users only really got $10 off, not $20.

This is all kinds of things. False advertising by FTD to start, since they’re showing a different retail price for Groupon users v. people coming to FTD without the Groupon link. And, say users, the coupon only works if you go through the Groupon link.

There are other complaints about the offer as well, like FTD pushing deliveries to February 15, and charging a service fee. Those things are annoying. But the different price point is what really worries me.

For Groupon to continue to grow they need to get more big national advertisers, and those advertisers need to not be screwing around with customer trust. The Gap campaign was well handled. This FTD “deal” wasn’t.

Sour deals like this hurt Groupon’s brand, because burned customers won’t be so eager to check out the new daily deals. They’ll just assume it’s a scam, and ignore it all. Just like those HUGE SALE! signs in the window at your favorite retail store.

Update: Groupon responds below in the comments. Among other things, they’re giving users an automatic refund for any difference they paid over the retail price FTD was offering everyone else.

This is Joe Harrow. I’m the head of customer service at Groupon.

First of all, we totally see where everyone is coming from – we spotted this issue last night and have been working since then to make it right.

We just sent an announcement to everyone who has purchased this Groupon that explains what we’re doing:

First, we worked with FTD to make the Groupon valid for merchandise at the sale price. As customers ourselves, we were confused by the initial presentation of the prices as well.

Second, anyone that already used their Groupon to buy something from FTD that was on sale will automatically receive a refund to their card for the difference that they paid over the sale price.

There is nothing more important to us than cultivating our customers’ trust, and we know that the best way to do that is to consistently offer great deals without “gotchas.” Thanks to everyone who expressed their disappointment and called this to our attention.