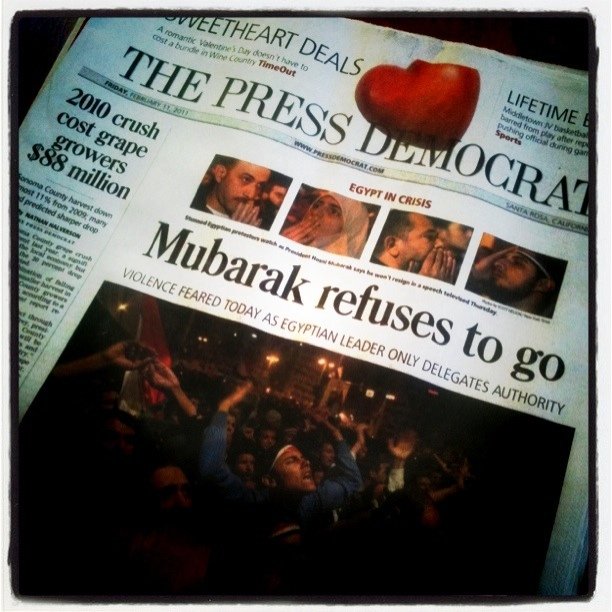 A lot of people like to bitch and moan about how in the age of realtime information, the stream moves too quickly and as a result, there’s a decent chance of inaccurate news being spread. There’s no question it’s an issue, but with the situation in Egypt, we’re once again seeing the overwhelming upside of this realtime data spread that makes services like Twitter so powerful. And just look at the flip side.

The above image shows the frontpage of a newspaper that was delivered this morning. There are hundreds more like it around the country. Many, many people still get their news this way. They woke up this morning, opened the paper and got information that is so old that it’s now totally inaccurate. It’s ridiculous.

This has actually always been an issue — “In related news, DEWEY DEFEATS TRUMAN!,” quips Twitter’s Mark Trammell — but if radio hit the newspaper format over the head, the live, 24/7 television news channels drove a stake in its heart. And now the realtime web has pounded that stake deeper. With a sledgehammer. And then stuck a grenade in the mouth of the corpse.

I’m sorry, but there’s simply no role for the newspaper anymore. That’s not saying there’s no role for newspaper journalism, just the physical product itself. It’s a waste of paper, ink, and time. R.I.P.