Last December toolbar startup Conduit announced they were bailing on Google search in favor of Bing.

In January Bing surged in search market share, up over 2 points to 12.8%.

You wouldn’t think Conduit was the main force behind the rise. But the data suggests it is.

Conduit didn’t just bail on Google in favor of Bing. They also changed the way they do search. They previously put Google results onto their own domain. Now when someone searches from the Conduit toolbar the user is results are shown on Bing.com directly. So Conduit is losing all those page views and sending them to Bing.

Look at this comparison of Bing and Conduit from Alexa: 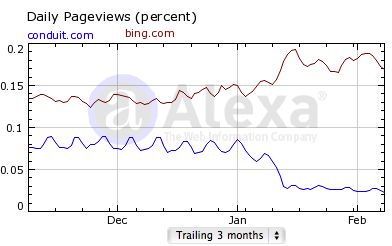 Coincidence, or cause and effect? That Conduit search deal may have been a lot more important than anyone realized at the time it was announced.