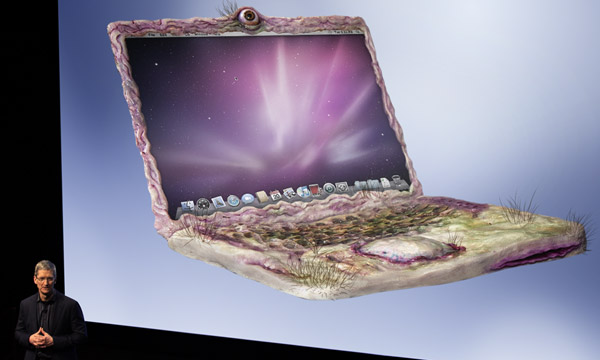 When Apple CEO Steve Jobs announced he was taking another medical leave of absence earlier this year, the talk immediately started. “But what happens when Apple has to release a new product?” “Will it suck?” The truth, of course, is that Apple has a pipeline of products that likely spans years — all based on calls made while Jobs was in charge. And many of those are already in various levels of late-stage development. But what if a new products slips through the cracks? What if interim Apple head Tim Cook greenlights something awful? The Onion explores this possibility today.

“Cook presented the bizarre, malformed new product to stunned silence during a media event at Apple headquarters, revealing a device that, while vaguely similar to a computer in certain respects, appeared to be encased in a thick, flesh-like coating that was visibly moist and engorged,” notes The Onion.

“Shocked audience members claimed the appalling laptop, which seemed to many onlookers to have functioning digestive, muscular, and urinary systems, was “hard to look at” and easily the most repellent product yet manufactured by Apple,” The Onion continues.

But, the silver lining:

“As of press time, 3.2 million loyal customers were lining up overnight outside of Apple stores across the country for the chance to buy the slick new abomination.”