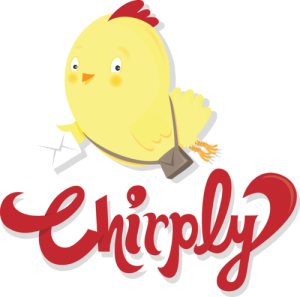 You’re probably getting tired of going back to Hallmark time and time again for the same staid cards you’ve been sending granny for years, and I’d be surprised if you’re not running out of occasions that demand a card bearing a cheesy one-liner or a sappy stanza of poetry. Thankfully, YC-backed Chirply, which launches this week, is breathing some new life into greeting cards — and notebooks, and wrapping paper — by creating a crowd-sourced community where designers can submit fresh ideas for paper goods. Users like you can then vote on your favorite designs, whereupon the ideas that receive the most votes are made champion and turned into real, live products and printed by the Chirply team.

But Chirply isn’t just copy-and-pasting ye olde crowdsourcing model onto the paper industry, it’s offering crowdsourcing with a financial incentive. The designers whose ideas collect the most votes are awarded a $300 prize, plus an additional 10 cents for each item that is printed with their design. Compared to Hallmark, which doesn’t accept unsolicited artwork for their greeting cards and pays their staff and commissioned designers a flat fee with no opportunity for royalties, Chirply is opening the playing field to budding designers out there looking to see their ideas brought to life. What’s more, according to the Chirply founders, as sales increase, so too will the size of the prizes, so they can finally put those studio art degrees to work! For money!

In the spirit of giving, Chirply is offering TechCrunch readers the opportunity to claim one free card, which you can do at their exclusive TC landing page here. One per person, please, don’t get greedy.

Though Chirply co-founders and brothers Gagan and Neel Palrecha have tech backgrounds — Gagan was an early employee at Loudcloud and an Engineer at Vontu — they told TechCrunch that they were booking bands in their basement beginning in high school and even founded a record label, so they know what it is like to support artists. Or in this case, designers.

Even so, the Palrechas know what they’re up against, telling us that Hallmark spends $60 million a year on design for their cards and companies like Threadless have made a buck or two on the crowdsourcing clothing space: “Sure, paper in general is not sexy, which is why a vast majority of crowdsourced companies go after t-shirts, but the greeting card industry is a $10 billion industry in the U.S.,” Gagan told TechCrunch. Though Chirply has some competition in the big picture from sites like Minted and Tiny Prints—Minted, for example, specializes in selling bulk greeting cards. Chirply, on the other hand, views the paper goods space as a green field. Those competitors that do exist have either found their niche, specializing in wrapping paper, or selling greeting cards in bulk.

Chirply also hopes to beat their competitors by offering competitive pricing, quality design, and heavier stock. Their cards will sell for $4 a piece and $30 for a set of 10; compare this to Papyrus, for example, which sells similar cards for $6 to $10. While Papyrus does offer a selection of cards for under $4, the cardstock is cheaper and the choices consist mostly of re-hashed Hallmark designs. Not to mention, if you’re green-sensitive, all of Chirply’s products will be post-consumer waste and green to the gill—and if you’re a design snob, you’ll be happy to know that they’re printing their cards on 120 lb stock, instead of the usual 80 lb. Now that’s beefy stock.

Chirply plans to eliminate high overhead costs by avoiding brick-and-mortar stores, conducting all business online through their website. Their paper products will be both tangible and digital, but don’t expect their stores to be anything but the Internet kind.

This week’s Chirply launch will open up the forum to design submissions, and submissions will be open to the general public (and on-going) from there on out. They will also be offering more exclusive products and contests, like one featuring designs by a certain to-be-named comic book company that will launch in the near future. Palrecha wouldn’t tell me which one, but I’m hoping I’ll be able to send my dad a Mr. Freeze card sometime soon.

Lastly, though you may spend most of your time punking your friends with Someecards, Chirply will allow you to vote on the best in-card slogans and have custom messages printed on your cards so that your boot-strapped startup can send those customized holiday cards to local VCs and angels. Just in time for Valentine’s Day! 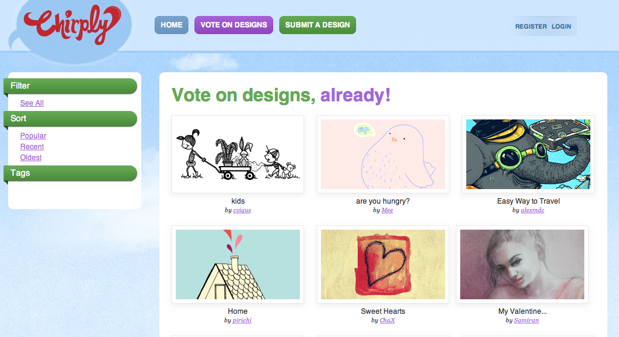