When Yahoo handed search over to Microsoft, it shut down some of its developer programs but one that survived was Yahoo BOSS, its search API for other websites. Last summer, however, Yahoo announced that BOSS would no longer be free for developers.

Today, Yahoo finally released the upcoming pricing for Yahoo BOSS. Unlimited searches across the Web will cost 80 cents per 1,000 searches, with cheaper prices for a more limited index (40 cents), images (30 cents), and news (10 cents). Sites that generate enough search volume can apply for Yahoo search advertising to also be shown. A portion of any resulting revenues presumably would be applied against the charges, and maybe even help developers make a little money off search. 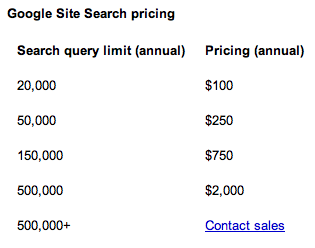 That is the way Google’s custom search API works. Google actually charges more on a cost-per-thousand basis (anywhere from $4 to $5 per 1,000 searches), but it remits a portion of that based on how search ads perform on your site. For moderate to large sites, the calculus will be which search API can deliver the most revenue after all is said and done. For developers who just want access to Web search, the lower cost of Yahoo BOSS could certainly be appealing. It is at least five times cheaper on a pure cost per search basis (assuming it is not offset by any search revenue).