Ray Bradbury’s 1950s novel Fahrenheit 451 had a lot of stuff about book burnings. But it captured my imagination when I read it in 7th grade because of the TV Parlors – entire rooms where the walls were completely covered in TV screens, creating an immersive, interactive, 3-D experience. The protagonists wife, Mildred, desperately wants the fourth wall size screen to complete her TV Parlor.

And we all kind of want that, too. Forget that 60 inch television or 30 inch monitor. We want screens that cover walls. Screens we can touch.

Microsoft has done some interesting stuff with cheap infrared lasers and a projector that can create a touch experience on any wall. See this 2008 post where I tested the device.

But that’s nothing compared to what’s being called the world’s largest touchscreen – a 10 meter by 2.8 meter monster that can detect up to 100 simultaneous touch inputs. Once again, infrared is being used to handle touch.

Mildred would have been impressed.

In the late 90s people started buying their first flat screen plasma TVs, paying $15,000 (installation included). Today $1,000 will buy you a much, much better flat screen TV. Would you pay $15,000 to have this 10 meter touchscreen in your living room? A lot of you probably would. 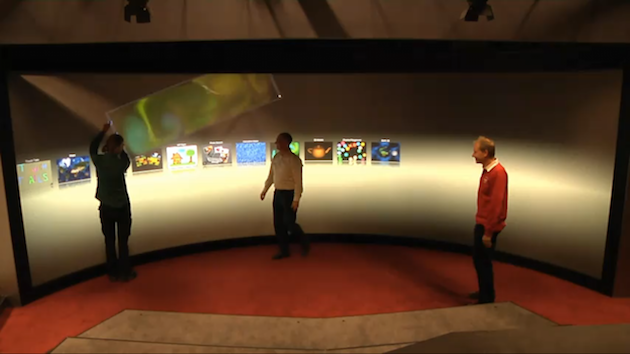