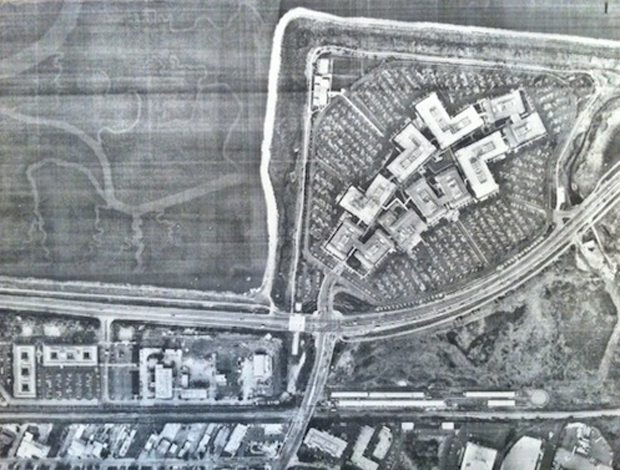 Why has Facebook brought together big time press from Agence France, Bloomberg, ABC 7 and TechCrunch together here at Menlo Park City Hall? Because it’s hiring, and it wants to announce it by purchasing a building.

David Ebersman, the CFO of Facebook and Menlo Park mayor Rich Klein made the announcement: As we previously reported, Facebook will be moving from the space it has leased on S. California Avenue and 1050 Page Mill Road in Palo Alto into Sun Microsystems’ old headquarters, an 11 building, 57 acre, 1 million square foot property on the Bayfront Expressway in Menlo Park.

The building can accommodate 3600 people (and boasts 3700 parking spaces) and Facebook Head of Real Estate John Tenanes said that it could hold, “Even more.” Facebook has also bought a 22 acre building connected to the campus by a tunnel, for “possible future development as a subsequent expansion phase” according to a release. The ETA of the initial move is June/July and Facebook plans to move all operations to Menlo Park by the end of the year.

It was rumored that Facebook had been considering a leaseback of the property, with the purchase being assigned to a state pension fund. A 15 year leaseback was confirmed today, with the option to buy after 5 years. Facebook would not disclose further details on the financials.

Facebook has more than 2000 employees, a number that has doubled since last year when they outgrew their space in Palo Alto. “We are reaching a point where we won’t be able to fit,” Ebersman said. “Facebook is growing 50% a year in terms of headcount and our growth plan is to continue hiring in the Bay Area.” Many think that the company now boasts over 600 million users, with 11.5% of the world now on Facebook.

At a valuation of $50 billion, Facebook is 1/10 the size of Google (which has 20,000 employees)in terms of staff but only 1/4 in terms of market valuation. Hiring talent in the tech sector has been a battle as of late. And it seems like real estate buys are the hot new battleground: Google recently bought a building in New York for $1 billion dollars and Twitter is reportedly considering a move to Brisbane, of all places.

When asked whether the campus would offer similar perks to Google, Ebersman said tongue in cheek, “Our objective is to make Facebook a great work environment in our way.”