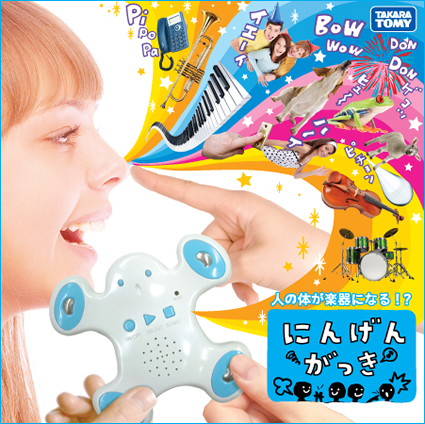 Japanese toy maker Takara Tomy has developed a gadget [JP] that turns the body of a human being into a musical instrument (of sorts). Dubbed Ningen Gakki (“Human Instrument” in Japanese), the little toy can be used by four people at the same time.

Each player has to touch one of the four silver parts (electrodes) placed on the device and then touch another player’s skin to create various sounds: a light tap results in a short sound, while a longer touch produces a longer sound (there are various pre-installed game modes, melodies and other bells and whistles).

The video embedded below (in English and produced by Diginfonews in Tokyo) provides more insight:

Takara Tomy plans to roll out the Ningen Gakki in Japan in June for $39. Ask specialized online store Rinkya to get one for you if you live outside this country.