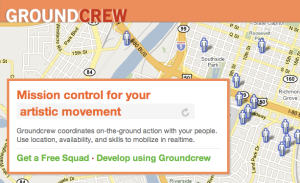 One of the Collaborative Fund’s recent investments is Groundcrew, a company that utilizes geo-location and messaging to help average Joes and businesses coordinate mobile teams. Unlike the hyper-focus of an app like Wheretheladies.at, Groundcrew has broader, more community-conscious goals in mind than helping a dude get laid. Reflecting Collaborative Fund’s effort to promote social enterprises responding to broken or outdated models, Groundcrew CEO Joe Edelman told me that the inspiration for the platform grew out of his experience as a relief worker in post-Katrina New Orleans. The appallingly slow coordination and mobilization of relief in the wake of Katrina was a well-documented nightmare and made the public’s (and government’s) need for a better model for geo-coordination frighteningly clear.

Groundcrew aims to capitalize on the beginnings of a geo-coordination revolution by offering web and mobile software that allows individuals, businesses, and teams to rally community members around a particular issue, gather them in real life, mobilize those teams in real-time, and reuse, manage, and share resources during and after those events.

The uses of this service are potentially endless; think of it as a way to organize and coordinate everything from house parties and oil rig evacuations to medical care and traffic flow. Traditionally, only large organizations with multi-million dollar budgets have had access to realtime planning and mobilization software, but today we’re seeing a host of small companies entering the market with the goal of coordinating real-world activity from car-sharing and dating to carpools—like Uber, Getaround, TaskRabbit, and NeighborGoods to name a few.

These companies have begun to disrupt the traditional model, offering location information, mobile messaging, opportunity detection, and integration with social media — all great features. However, on the back-end, for developers looking to create apps or scale their clients’ services using these features, they’re often forced to create a mobile client for each mobile platform, bridges to social media APIs, an SMS infrastructure, in order to achieve these goals. This can be time-consuming and impractical.

Groundcrew offers these functions, along with the ability to see which of your team members are available and contact them via SMS, IM, Twitter, or email, but it hopes to set itself apart by seeing the broad picture and doing the hard work for both businesses and developers. To make their jobs easier, for example, Groundcrew provides access to its mobile clients’ open-source libraries as well as its own web-based interface, scripting language, and API, allowing developers to create branded apps without the fuss and the muss.

Edelman says that the current mindset of the geo-coordination space is to “treat coordination as a kind of special sauce. This is comparable to the state of websites before the rise of WordPress, Drupal, wikis, and Google Sites. What we’re going to do to this market is make it easy for even complete amateurs…”

In order to make it a one-stop shop platform for all your coordination needs, the Groundcrew team, which includes co-founder and former Interaction Designer at Google Chad Thornton and Head of Communications Jordan Stout, wrote its own scripting language, called CEML (Coordinated Event Markup Language). The team claims that CEML is the “first system for scripting group dynamics and organizational logistics,” which allows developers to write actions that could, “say, rapidly divide a stadium worth of people into six-person teams with different roles and assignments.” You can check it out on their API page here.

While similar enterprises like Uber may have more visibility and user adoption, Groundcrew has already raised $700,000 of funding from Collaborative Fund and investors like Dave McClure and Jason Calcanis, and a few Bay Area organizations have begun testing Groundcrew pilots, including the Red Cross, San Francisco-based game developer, Situate, and eldercare group called Avenidas.

So, are you looking to organize and coordinate a crowd of groupies for your Hall & Oates coverband’s big show, or plan a surprise birthday party for your cat? Groundcrew thinks that making their software available to ordinary people, communities, and businesses like yours has big potential.