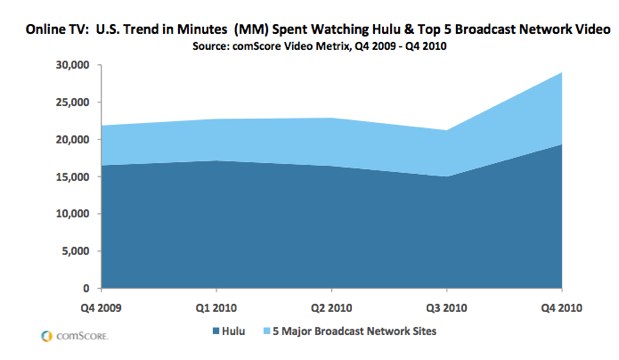 In a new report on digital trends in 2010

When it comes to premium video on the Web, Hulu still rules. In the fourth quarter, the U.S. online audience watched 19.4 billin minutes of video on Hulu, which was twice as much as the how much viewers watched on the websites of the five major TV networks combined. Viewers watched another 9.7 billion minutes of online video on the websites of ABC, CBS, NBC, Fox and the CW. The chart above comes from a new Digital Year in Review report from comScore.

Hulu has a love-hate relationship with the TV networks. They realize Hulu is a better distribution channel than their individual sites (people want to find all their shows in one place), but they also don’t want to cede their audiences to Hulu. This tension leads to constant negotiations with the networks and attempts by Hulu to move to a subscription model, at least on new platforms like the iPad.

But as the chart above shows, Hulu isn’t going to be displaced anytime soon. Maybe that is why Viacom recently brought back Colbert and The Daily Show