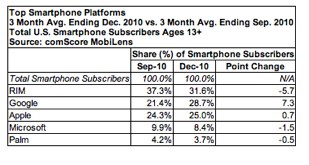 comScore’s monthly smartphone data is in and it looks like for the first time Android OS has surpassed Apple’s iOS in terms of U.S. smartphone subscriber share. The data, which measured smartphone usage from September until December of 2010, showed that 63.2 million people in the U.S. owned smartphones during period, up 7.3 percent from the preceding three month period.

RIM once again led with 31.6 percent market share of smartphones, and Google’s Android OS maintained the #2 position with 28.7 percent, which is up 7.3 percentage points versus September. Apple accounted for 25 percent of smartphone subscribers (up 0.7 percentage points), followed by Microsoft with 8.4 percent and Palm with 3.7 percent.

comScore also examines mobile content usage on phones; reporting that in December, 68 percent of U.S. mobile subscribers used text messaging on their mobile device, up only 1 percent from the previous three month period, while browsers were used by 36.4 percent of subscribers (up 1.3 percent). Interaction on mobile devices was up as a whole, with subscribers who used downloaded applications comprising 34.4 percent of the mobile audience, representing an increase of 1.3 percent. And 24.7 of U.S. subscriber accessed social networking sites or blogs via their phones, which is an increase of 1.5 percent. Playing games attracted 23.2 percent of the mobile audience, while listening to music attracted 15.7 percent of subscribers.

While this data indicates reach vs. number of units sold or sales, Android has continued to grow strongly over the past year.