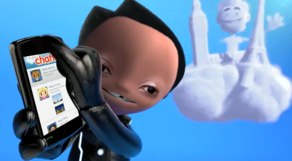 Well, Salesforce just debuted its Super Bowl Chatter ads (we’ve embedded the ads below), which were a little disappointing. The ads featured Will.i.am and the rest of the Black Eyes Peas in a cartoon promoting the CRM giant’s ‘Facebook for the enterprise.’

The ads, which aired during the halftime show, include what appears to be computer-generated cartoon versions of Will.i.am (he actually co-produced the ad) and his bandmates, zooming around, and talking about how Chatter helps them communicate more efficiently. To be honest, I find the commercials a little confusing and too quick. And it’s hard to imagine that a technology company would spend millions for two ads that seemed to be average at best.

And Will.i.am is sort of a stretch as an enterprise customer. But as Salesforce opens Chatter to the public, the company has ambitions of making the communications platform more of a mainstream tool.

How much do you want to bet that The Black Eyes Peas have never used Chatter? $3 million?

What do you think? Will these ads help Chatter become the ‘Facebook for the Enterprise’?