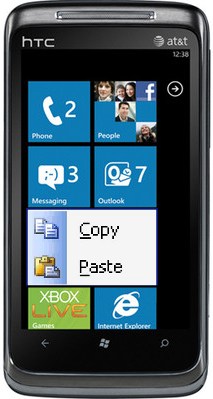 Microsoft just recently made available a new version of the Windows Phone 7 SDK, and boasts that the dev tools have been downloaded nearly a million times. That’s a lot! Have they even sold a million phones? At any rate, I’m guessing the latest of these thrill-seeking downloaders were attracted by some new features in the SDK, perhaps most prominently the ability to copy and paste.

It’s actually a little disappointing to me: when Microsoft implied that they had designed their OS so that copy and paste would be made redundant by their cleverness, I was skeptical but intrigued. As it turns out, that’s simply not a proposition worth pursuing: sometimes people just need to copy some text and paste it somewhere. But I would have been interested in the ramifications of serious design decisions meant to obsolete the idea of copy/paste. Ah well!