GroundLink — a New York City transportation technology and travel services business — released a new mobile app this week. The second iPhone app from the company, GroundLink allows users to book a hybrid, electric or otherwise clean-vehicle car, shuttle or limo to get around cities around the world.

Users can also opt to book a ride by lowest price, highest service rating or soonest and nearest available driver with the app. The company’s chief executive Alex Mashinsky noted:

“Over 5,000 of our [transportation] providers offer green vehicles – all forms, including hydrogen fleets in Los Angeles, even. It’s not all hybrids and electrics. Some countries have promoted natural gas vehicles.

That said, we let the customer choose by their own preferences. If they want an SUV, a stretch limo or whatever, they can book that service, too.”

Mashinsky expects to see the user-base for his company’s phone apps grow in travel hubs in the U.S. and Europe, rapidly. GroundLink’s goal is to have 10% of its overall bookings being taken on smartphones by the end of the year, increasing to over 25% by 2013. It plans to release an Android app in March. 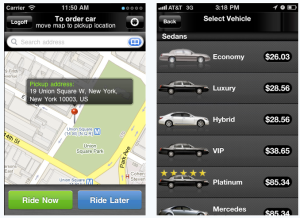 In late January, GroundLink struck a partnership with the travel search engine, KAYAK hoping to reach new audiences online and on mobile networks.

If it takes off in the Bay Area market, the GroundLink app could prove a competitive threat to Uber, the sometimes controversial California startup that also offers driver-booking services via iPhone.

As with Uber GroundLink users can view a map that shows a vehicle’s whereabouts in real-time, once it is booked and en route to a pick-up. Users can also share a map showing their whereabouts and progress towards a destination (Loopt-style) with authorized friends, family, colleagues, or employees.

Avoiding some problems that Uber encountered with the incumbent taxi industry and its regulators around San Francisco, GroundLink books rides through a central dispatch system that company representatives say is controlled by a local base, and authorized by relevant regional and national transportation authorities.

GroundLink deals with taxis but does not focus on or make revenue from sending business to taxi dispatchers at this time, nor does it advertise itself as a cab-hailing service. If users want an immediate taxi service, they can access a list of dispatchers in the area through GroundLink, which refers users to book through the dispatchers, directly.

Instead, GroundLink bills itself as the OpenTable of ground transportation, a reservations system and marketplace that lets travelers book a limo, car or shuttle ride within 30 minutes’ notice in the U.S., or in the world on 1 hour notice, seeing a price for the ride before they book it.