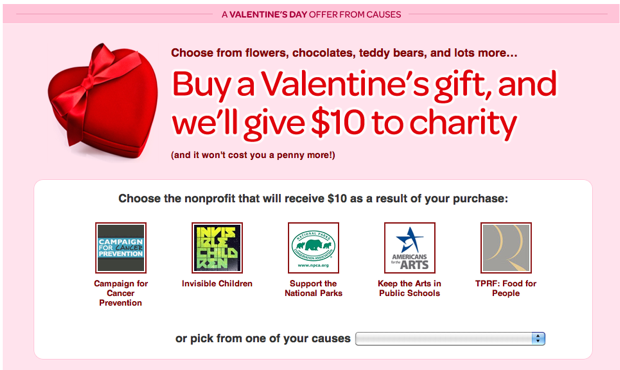 It’s only ten days til Valentine’s Day (ugh — err, yay!), which means many of you are vaguely aware that you should do something special for your significant other. And this year there’s a way to give your sweetheart a nice gift while also giving back to charity.

Causes has just launched a special promotion available at Causes.com/valentines. The concept is simple: buy a gift through the site, and you get to donate $10 to a nonprofit, like Campaign for Cancer Prevention or Invisible Children. You can also choose to donate the money to any of the Causes you’re part of on the site. Pretty cool.

Causes is essentially donating the affiliate fees they’d typically receive from their retail partners. The promotion is using different retailers for twenty countries around the world: in the U.S. it’s Proflowers, Spain has Aquraelle and Serenata Flowers, and so on.

Causes founder Joe Green says that the company’s main goal this year is to make as easy as possible for people to give — and this is about as easy as it comes. But the service did run into one snag: Causes has viral sharing down to an art, but they’ll have a hard time getting this promotion to go viral because writing “Jason bought some Roses on ProFlowers” to my News Feed would spoil the surprise.

Fortunately the service will still tell my friends that I donated $10 to a charity, so they’ll think I’m a good guy. For bonus points, donate your $10 to your sweetheart’s favorite charity (and don’t be shy about telling them).