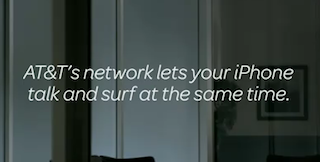 Yesterday, Verizon launched a commercial campaign to highlight that they now have the iPhone 4 with one important feature: the ability to make calls. While they never mention their competitor (or humorously, even the iPhone itself), it’s clear who this was aimed squarely at: AT&T. But AT&T is not about to take the punches sitting down. Today, they have their own ad.

“Answers” shows a man in his office working when he receives a call on his iPhone . It’s his wife, wishing him a happy anniversary. Naturally, the man forgot. He quickly heads to Google on his iPhone and starts searching for a restaurant to make a reservation at. This is something that would not be possible with the Verizon version of the device.

The voiceover hammers their point home a little more directly than Verizon’s commercial did yesterday: “Only AT&T’s network lets your iPhone talk and surf at the same time.”

Of course, I’m going to assume the man has access to a computer in his office building. He could have just as easily hoped on that. But I digress — this is war!

I wonder what the over/under is on how many of these commercials we’re going to see? I’d bet the over.