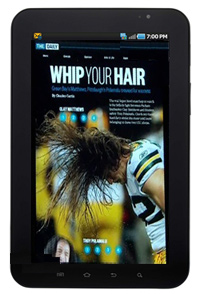 News Corp. and Apple have just announced the launch of The Daily, an iPad-only digital newspaper of sorts that promises to, if nothing else, shake things up a little bit. But will it be iPad -only forever, or does News Corp. have other ideas? Survey says: other ideas.

We’ve been very upfront with Apple. We expect to be on all major tablets. But this year and next belong to Apple . That’s just a market judgement

So far, there really aren’t any “major” tablets not called the iPad, but let’s assume someone makes an Android-based tablet in the next two years that even remotely approaches mass appeal. Given Murdoch’s statement, it wouldn’t be too difficult to imagine an Android version of The Daily.

Then again, given how rapidly Android development proceeds, who’s to say what the tablet landscape will look like in two years’ time? Did anyone even know what a tablet was two years ago? And by anyone I mean someone who doesn’t spend all day long F5-ing tech sites.