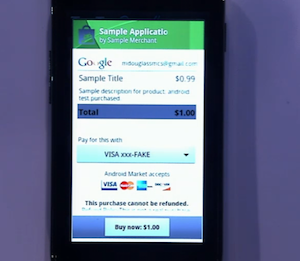 Today at their Honeycomb event at the Google HQ in Mountain View, Google had a lot of information to share. First, they gave a demo of the new Honeycomb features. Then they shared the new Android Market Webstore. And then they had an announcement to make that a lot of people have been waiting for: in-app purchases.

Android engineering director Chris Yerga noted that developers that use their in-app purchasing SDK will be able to sell virtual goods and the like in their apps. And one of those developers who has been waiting for a while for this is Disney Mobile. Google has been working with them to get an important game of their’s ready for such a launch: Tap Tap Revenge. Yes, the game that has had over 50 million downloads is finally coming to Android.

Disney Mobile’s Bart Decrem took the stage to show off TTR and a few of their other apps. He also showed off how in-app purchasing will work. Decrem noted that some 25 million songs have been downloaded inside of TTR thanks to in-app purchases (on the iOS platform, of course). And he said that they were given the latest Android in-app code just five days ago, so it was very simple to implement.

One thing to note is that the feature won’t launch until the spring, though Google is giving the SDK to developers now to get them ready. Yerga promised a launch by the end of this quarter.

Honeycomb Is The First Shot Fired Along Apple’s Bow

Here’s What Pulse Will Look Like On Android Honeycomb