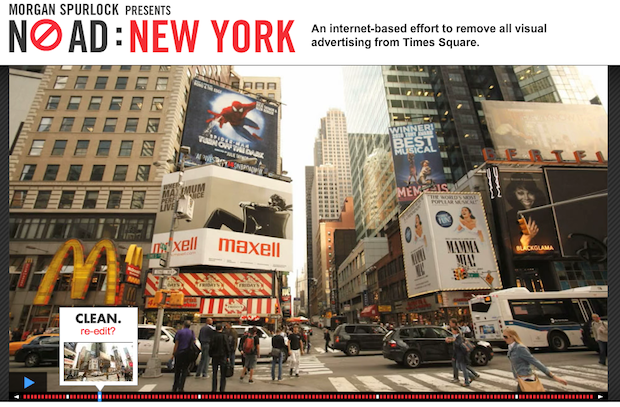 Close your eyes and picture Times Square in New York City. What do you see? Probably an insane amount of ads. Sadly, that’s the defining characteristic. But what would it look like without ads? A few groups have teamed up to create a web app to find out.

No Ad – NY is a collaboration between Aviary, The Barbarian Group, and Morgan Spurlock’s Warrior Poets. The idea is simple: take a 360-degree picture of Time Square, and use an online picture editor to remove all the ads, the re-upload the edited picture to show the world what a Times Square without ads would look like.

Specifically, the image has been cut up into 100 smaller images that users are asked to click on to edit in Aviary to remove the ads in their frame. Currently, five of the frames are done, and at this rate, the hope is that all of them will be done in a couple of weeks (though it could be sooner).

So why do this? As the site states, Spurlock was inspired by Sao Paolo, Brazil. That city has banned all outdoor advertisements since 2007 in an effort to clean up “visual pollution”. (Check out the video below.) So Spurlock called upon The Barbarian Group and Aviary to create a virtual way to do the same thing.

Something tells me that Spurlock, best known for his extreme documentaries like Super Size Me, also has another documentary in mind here. So get to work and clean up Times Square — just like New York did in the 90s, but this time you get to remove ads instead of strippers.