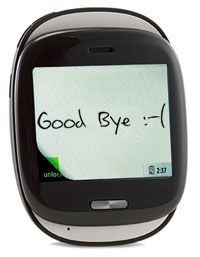 Accurately predicting the swift failure of a handset — as we did to a T with the Kin — is bittersweet. On one hand, being right is always nice; on the other, knowing that people worked hard on something only to have it canned due to mismanagement and a confused vision is disheartening. (Fortunately, we know for a fact that a good chunk of those people are off on bigger, better projects now.)

As of this morning, the last lingering trace of the Kin was thrown into a shallow grave with the rest of the project.

The specialized, Silverlight-based cloud syncing service, KIN Studio, was allowed to run for 7 months after the Kin was discontinued on June 30th, 2010 (a discontinuation which came just 48 days after the device’s initial launch).

As a result of KIN Studio’s termination, the following services stopped working:

In other words, nearly every feature the social-oriented KIN was built around stopped working. On the upside, Verizon gave anyone who had the misfortune of nabbing a KIN during its 48 day lifespan a 3G device of their choosing, free of cost.

Anyone out there still holding on to there now mostly-bricked KIN?