Power-One, Inc. (NASDAQ:PWER) — a large manufacturer of power inverters for the renewable energy industry and provider of software to manage power harvesting and distribution — opened its first North American manufacturing facility in Phoenix today, where they plan to employ 350 people full-time.

According to a company press statement, the facility will primarily produce photovoltaic and wind inverters that convert renewable energy into a usable form of electricity for distribution on the utility grid. The chief executive of Power-One, Richard J. Thompson, explained ahead of the facility’s opening ceremony on Monday:

“We have manufacturing design centers, service centers and a sales force in Europe, the U.S. and Asia, now. Europe has been where the largest percent of our revenue comes from, some 90 percent today. At the beginning of 2010, we started creating product for U.S. customers who may have [made-in-America requirements] and fielding a sales force and developing a service organization here. This is a continued geographic expansion to bring our technology and services to the U.S. market. ”

The company scouted sites in the “sun belt” states, and specifically looked at Texas, Mississippi and California along with Arizona. They chose Phoenix for this facility, Thompson confirmed, due to: availability of technical resources and talent thanks to the proximity of Arizona State University, and grants from local government that are tied to employment in the area over the long run. 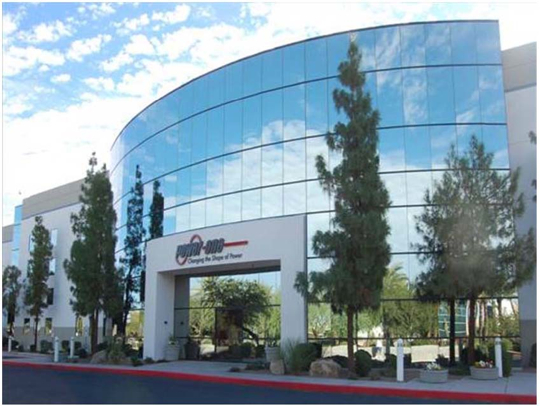 Power-One is facing different market conditions in the U.S. where about half the demand for its inverter technology comes from residential and commercial buyers, the other half from utilities, and where government incentives to develop renewable energy generating projects have not been strong as they have been in Canada, Germany and elsewhere.

As such, Thompson explained:

“The Phoenix facility will enable us to do many things, including introduce a new line of products towards the third quarter of 2011, like a liquid cool set of inverters for utilities.

We’ll also have a Power-One research and development center in Phoenix that will add some 35 graduate engineers and technicians in addition to our manufacturing headcount over the next two years.

We’re also strongly considering manufacturing at this site for export. That was not in our plans earlier. But we like the efficiency we’re seeing out of this factory, so far, from a small sample. We’ve had about 40 folks there in manufacturing so far.”

Power-One competitors include Emerson Network Power (NYSE: EMR) based in St. Louis, Missouri, and the strongly venture-backed Enphase Energy, which recently announced plans to triple its capacity and start selling its inverters in Europe.