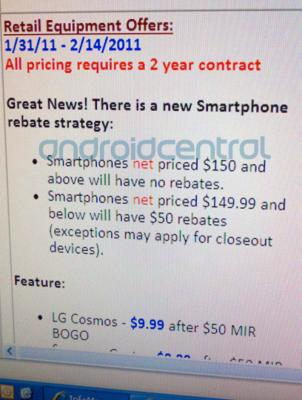 Mail-in rebates are the pits. If you remember to send them in, you’ve gotta pray that Mr. Mailman doesn’t lose it, toss it, or take it back to his You-shrine for worship. Then you’ve gotta wait a few months for it to “get processed”, which is a fancy way to say “sit in a big pile until someone gets around to it”. Eventually (generally long after you’ve forgotten you sent the rebate form back in the first place), you get a random envelope back from a processing company you don’t recognize, and there’s about a 50/50 shot it goes in the trash unopened. It’s an archaic process, often used by retailers banking on the idea that few people will actually bother to send it in or cash the check.

According to our buds over at AndroidCentral, Verizon’s tired of’em too. While phones that go for sub-$150 will still be paired with mail-in rebates, they’re ditching the rebate system for anything over that price. The good part: as long as their source is hearing right, the wallet-friendly price cuts will still be there — they’ll just be instant.

Lets just hop that last bit’s true — and if it is, that it starts a trend.