At this point most of us are feeling pretty cool about ourselves for at least retweeting the #Twitterrevolution, first in Tunisia and now in Egypt. But only when us Internerds watch mainstream television do we realize that pundits are trying to give the Bush administration and the Obama administration credit for events which might irrevocably change the landscape of North Africa and the Middle East as we know it. Events that were, at least initially, mediated through Facebook and Twitter.

Of course The Daily Show host Jon Stewart takes a skeptical Gladwellian view to the entire situation, “If two speeches and a social media site is all we needed to spread democracy then why did we invade Iraq, why didn’t we just, I don’t know, poke them.”

He brings on The Daily Show correspondent and “Senior Tweet Analyst” Samantha Bee to defend the opinion that social media played the biggest role in the protests as opposed to “Team Local Conditions,” represented by the amazing Aasif Mandvi. Bee’s defense, “Duh @JonStewart this is something you’d know if your oversized old person phone got Twitter #burn.”

On a more serious note: When they were younger than I am now, my parents were witness to a student movement that eventually toppled a dictatorship in Greece through the radio. Communication in its sundry and consistently evolving forms is and always has been as powerful a utility as electricity and running water, and it’s important that we protect it as such no matter what its incarnation.

You can find the full video (which you should watch a couple of times) here. 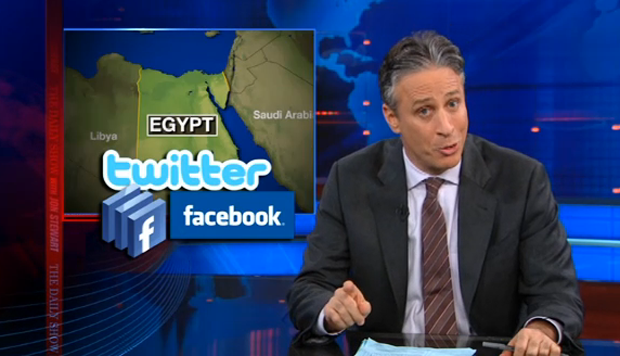