A company that provides software and services to the transportation industry, Avego, introduced a pilot program called go520 in Seattle today, to match drivers who have empty seats in their vehicles to carpoolers on their route, using an app for iPhone and other GPS-enabled smartphones.

The project could do for commuters what Cabulous and Uber have begun to do for taxi drivers and their potential customers — make it easy to find one another, while hopefully curbing pollution and traffic congestion when there are too many single-car drivers on the road.

A Washington state -funded project, the go520 app and service allows up to 250 drivers to offer empty seats in their vehicles to 750 riders along Seattle’s SR 520 highway. Drivers require an iPhone; passengers can use any mobile phone with texting capabilities to access the service. The company will make a Windows Phone 7 version available in April 2011. 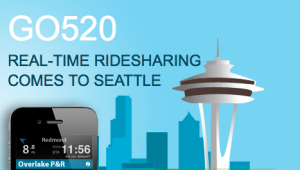 To encourage participation in the project, Avego will give go520 drivers who use their program 20 or more times each month a $30 gas card, and some other travel reimbursements. Riders will receive up to $30 per month in Avego credits to use towards travel beyond the program covered by the go520 initiative.

Washington state has sought to decrease emissions and reduce traffic around Seattle’s highways with a number of other approaches including: the installation of ramp meters, new tolling, bus services and web-based carpool services.

According to an Avego press statement:

In 2009, the Washington State Legislature required the state’s transportation department to conduct a carpool pilot project on the SR 520 corridor in King County. The pilot project includes a detailed evaluation of real-time [carpooling] to help policy makers determine how it compares to other demand management programs and whether it should be used elsewhere in Washington. WSDOT considered a variety of proposals and selected Avego to receive a $400,000 grant.

In December, Avego attained $5.6 million in series A funding in a round led by SOSventures.