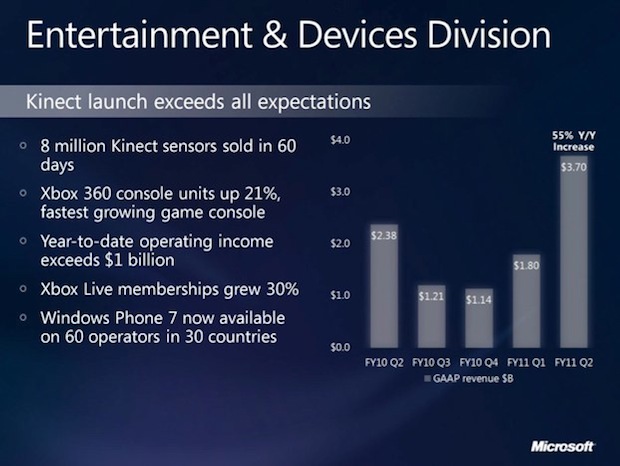 Microsoft earnings just got released prematurely 10 minutes before market close, and aside from growing revenues 5% in the 2nd quarter to $19.9 Billion, the company’s slides reveal some impressive growth numbers for their Entertainment and Devices devision, which generated $3.7 in revenue this quarter versus $2.4 last year, and sold 8 million Kinects, a motion controller for the Xbox 360, in the two months since its launch.

All in all division revenue is up 55% this quarter. Included in this number are sales of Xbox 360, the Kinect, the Zune and Windows Phone 7. Xbox Live memberships grew 30% and Xbox 360 console unit sales were up 21%, making“the world’s fastest growing game console” according to Microsoft. For those of you that have given up on Microsoft understanding consumer electronics, its increasing dominance in the gaming and device sector is a light at the end of the tunnel.

“We are enthusiastic about the consumer response to our holiday lineup of products, including the launch of Kinect. The 8 million units of Kinect sensors sold in just 60 days far exceeded our expectations. The pace of business spending, combined with strong consumer demand, led to another quarter of operating margin expansion and solid earnings per share growth.”