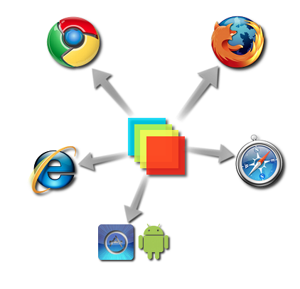 YCombinator-funded WebMynd, which launched in 2008 and was most recently responsible for the browser addon Search Smarter, is today announcing that it is the recipient of one of our heralded 2010 TechFellows Awards, from none other than Paul Graham himself. WebMynd will be using the 100K in financing to concentrate on its new product, the WebMynd Addon Developer Platform.

As the Search Smarter browser plugin was pretty popular, with over a million installs across Internet Explorer and Firefox, co-founder Amir Nathoo told us that the experience of building his own app led to WebMynd’s current incarnation (nay pivot). Nathoo realized there was customer demand for a platform that would allow developers to code apps once and have them work on IE, Firefox, Safari and Chrome right away.

Nathoo tells us that things were much simpler for app developers a couple of years ago when all people had to worry about was Firefox and the iPhone. Now there are multiple browsers and mobile platforms and a developer needs to tweak his code multiple times in order to port an app, unless he or she has a platform like WebMynd’s or Particle’s to do the dirty work.

Nathoo says “The issue for app developers now is how am I going to support all these platforms, and that’s a real pain …Our mission is to get all the great apps that developers are making to be available everywhere.”

While WebMynd is entering the space with a focus on amazing browser addons like this one, Nathoo’s future plans include adding mobile app support for iOS, Android and Chrome OS. He plans on monetizing with a freemium business model, charging a subscription rate per platform and allowing developers to use the Chrome extension framework for free to develop, and then charging them to port.

WebMynd is offering the first 20 TechCrunch readers who sign up their first port for free. You can check out the service here.