According to a number of tips we’ve received in the past few minutes, the chatter on Twitter and several local reports (mostly in Arabic), it appears Egyptian authorities have moved to block Facebook.

Inspired by the recent Tunisian demonstrations against corruption, protesters are filling the streets of Cairo to demonstrate against government corruption and policies.

If Facebook has in fact been blocked, this isn’t particularly surprising. Facebook itself has also been actively used to organize the demonstrations in Egypt. For instance, one Facebook Group called We Are All Khaled Said, features up-to-the-minute updates on the protests and photos from the scene. Khaled Said was “a young man brutally tortured and killed by police in Alexandria,” explains Blake Hounshell on the Foreign Policy blog, and his death has become a rallying point for the demonstrations which fall on “Police Day,” a national holiday in Egypt. And many of those who have been blocked on Twitter have now resorted to Facebook for activism.

We’ve contacted Facebook to confirm if the social network has been blocked and will update when we hear back.

We are aware of reports of disruption to service but have not seen any major changes in traffic from Egypt. You may want to visit Herdict.org, a project of the Berkman Center for Internet & Society at Harvard University that offers insight into what users around the world are experiencing in terms of web accessibility.

But the Herdict page shows that Facebook is increasingly inaccessible from the country. 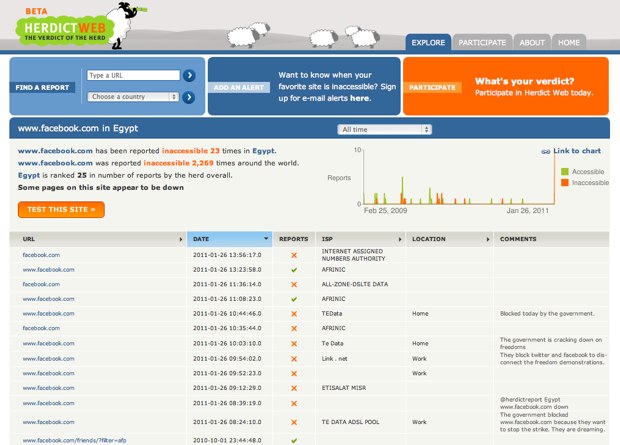