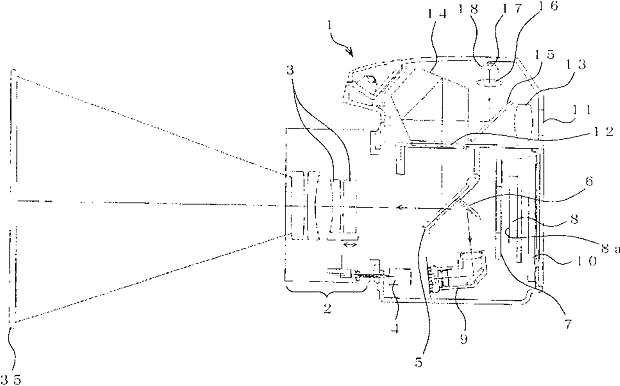 This patent, filed by Nikon in Japan, is really baffling me right now. The idea is that the viewfinder or eyepiece would serve not only as a something to put your eye to and frame shots, but also as a pico projector. Isn’t that a little dangerous?

At first I thought, why not shoot the image out the front? But of course there’s no way to accommodate the lens that’s on there. So I guess it has to go out the back, and you don’t want to add any more openings to the internals than necessary, so it’s got to be the viewfinder.

But really, these justifications would only be offered by an industrial designer if you put a gun to his head and told him to integrate a projector with a DSLR. No sane designer would ever want to integrate something you put your eye to with something that burns your retina. Even if you have a million failsafes, people won’t like it.

Man, can that really be what they’re patenting? The picture looks different. But the description is pretty specific.

They’ve already got a projector camera, so we know they’re crazy, but are they this crazy? At any rate, the patent is here, so make what you will of it.