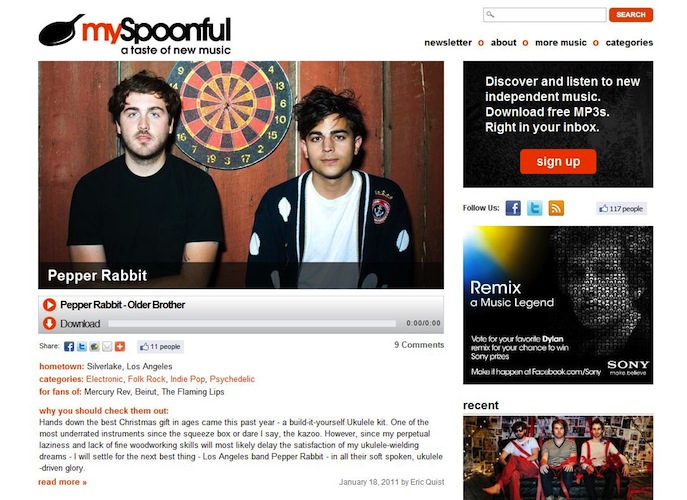 mySpoonful is a curated website and email newsletter geared towards indie music fans who are too busy to spend hours trudging through more extensive sites like Pitchfork and Stereogum. Says founder and ex-Pageflakes CEO Dan Cohen, “There’s a lot of newspapers and blogs that kids have to read to keep up with the cool kids … I read Pitchfork and Sterogum and a bunch of other sites, want to do in depth reading those are great sites but if you only have the time to read one email a day then we’re the ones.”

Offering just a “spoonful” of eclectic music content, the mySpoonful team (which includes Cohen, Stacey Horne and Amos Schwartzfarb) choose a new artist and offer a free song download about three times a week, posting it to the site and sending out the newsletter on Tuesday, Wednesday and Friday. “We’re like the web version of the employee at the indie record store that always knows what new bands to listen to,” says Cohen.

Right now the site has a national focus, but Cohen hopes that they will have local editions and cover specific music scenes like Austin or San Francisco sometime soon. Eventually he’d like to offer deals to their subscriber base a la DailyCandy and Thrillist, selling band merchandise and music.

mySpoonful is currently bootstrapped. Cohen plans on advertising on the site and in the email newsletter which already has 25,000 subscribers from a previous incarnation as Spooonful.

In the same space as Rcrdlbl, Cohen says there’s still a market to be tapped among casual music snobs, “We’re aiming at a different audience, a lot of people that are busy that are working and that have families but still pride themselves in saying ‘I’ve heard of Pepper Rabbit or Best Coast.'”