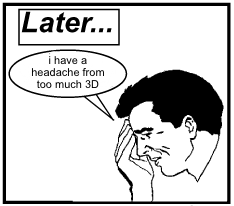 An article is making its way around the net today, a letter written to Roger Ebert by an Oscar-winning editor and sound engineer, Walter Murch, decrying a fundamental flaw in 3D filmmaking that he assures us ruins the entire idea. Despite Murch’s depth of experience in the film industry, I think he’s off the mark in this assessment. So hopefully I can dispel some of the incomplete information he’s spreading (no doubt with the best intentions) via Ebert’s blog.

Murch names a few subjective complaints first: the glasses compress the movie-watching experience, the image is dark, and the everlasting complaint that you don’t need 3D to tell a good story. You didn’t need color or sound to tell a good story in the 20s, of course, or movies in the first place, but that is something that is routinely overlooked by hasty critics of 3D.

His main problem is the convergence/focus issue. I discussed it in depth here, along with most of the other problems faced by 3D, but the gist is this: our vision has been trained to both converge our eyes and focus them at the same point, and 3D breaks that rule. Your eyes must always have the screen in focus, but they move around and converge on different points, sometimes close to you (when something comes “out” of the screen) and sometimes far away, “behind” the screen. As I noted before, this causes fatigue in your eye muscles, and can cause disorientation and headaches. 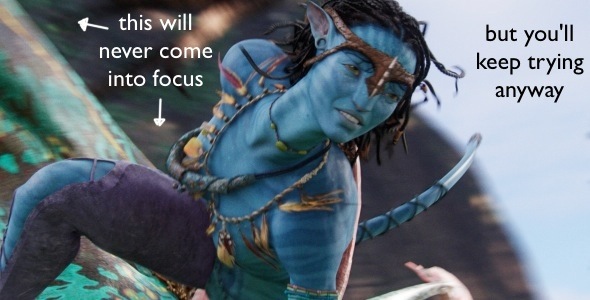 This isn’t a new problem. And as true as it is, it’s as far from a deal-breaker as the fact that movies used to be limited by the length of a film reel or the inability to sync sound to the action.

The convergence/focus issue is a limitation to the technique of 3D filmmaking. There are many such limitations, and we have overcome them to make use of the associated technology many times before.

If a director or cinematographer works from the start with the idea of a movie being in 3D, and is aware of the risks and limitations of the medium, then the movie will be made well. If, however, as has been the case with many movies of the last year or two, the 3D is not considered during production (adding it on is just plain bad news), the movie will have been made poorly. Nobody likes poorly-made movies, and the overwhelming majority of 3D movies are poorly made. The quality of the movie is the issue, not the technology behind it.

Just imagine this complaint in the 20s: “Not only is synchronized sound unnecessary for the telling of a good story (we have title cards and emotive actors already), but it is totally unlike sound in real life. While the characters are in front of you, perhaps on the left side of the screen, the sound is coming from a single speaker in the center. The location is off, the recording quality is bad, and the truth is that not many actors or directors are even enhancing their movies much by using this vaunted new technology. ‘Talkies’ will die out in a few years, and the greats (F.W. Murnau, D.W. Griffith) will retain their status as the foremost practitioners of filmmaking.”

At any rate, my defense of 3D is moot if people continue to make bad movies. I can’t defend the movies themselves, only the technology, which has already undergone great changes over the last two years, and further improvements are being looked into. Mr. Murch is perfectly right to point out the convergence/focus problem as a limitation of the medium, but for him and Ebert (whom I have rebutted before on the topic) to consider it fatal is, in my opinion, a lack of imagination and faith in the ingenuity of filmmakers.