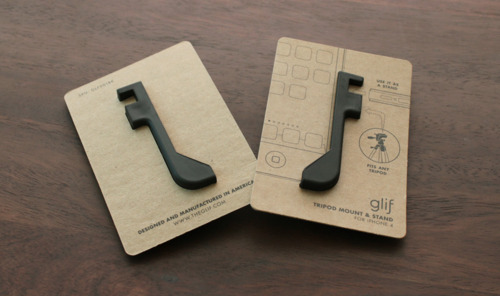 The Glif is an iPhone tripod mount. That’s it. It’s just a little hunk of plastic that, because if its unique shape and threaded mount, is insanely useful. If you’re not using it with a tripod you can easily attach it to add a bit of an angle to your iPhone for movie viewing. It’s pretty basic.

But what’s cool is that it took the inventors, Tom Gerhardt and Dan Provost, five months to go from idea to finished product. They prototyped the device using Shapeways, refined it, pre-sold it through Kickstarter, manufactured it South Dakota, and shipped it out using a fulfillment center. And they did it all via the Internet.

For example, here’s how they pulled off the manufacturing, probably the hardest part of the process:

Finding a manufacturer was our first order of business. When we imagined the scale being much smaller, we had planned on using ProtoMold for the injection molding, and we would melt the brass tripod inserts into the Glif manually. This was thrown out the window after the first day of funding, when the scale became too large to reasonably still expect to do that.

We found some companies through Google searches; others contacted us directly after hearing about our project and knew we were looking for a manufacturer. We ended up speaking with and getting quotes from six companies. All but one worked out of the US but maintained the actual manufacturing facilities in China. That ‘one’ is the company we ultimately picked.

Premier Source is a division of Falcon Plastics, both of which are located in Brookings, South Dakota. We chose them for a few reasons. From the onset, they just ‘got’ the project. It was very easy to communicate our goals and objectives when they already had a very good idea of what we were trying to create. It was also important to us that their facilities were located in the United States. Visiting the facility was an amazing experience, and allowed us to fully understand how our project was being created. That’s not to say we couldn’t have visited a facility overseas, but it certainly would have complicated things.

It’s locally sourced, locally made, and the company “got” their product. It was a match made in heaven.

People often are down on us (me in particular) for not supporting the indie hardware manufacturers. It is hard to sell hardware, but things are changing and the barrier to entry is falling to almost zero initial investment dollars.

Admittedly, it took quite a bit of good fortune and luck to pull off the success we had with the Glif, but I hope this piece can serve as a template for any inventors or entrepreneurs out there. The world is changing in a pretty incredible way, driving the financial risk for a project like the Glif basically down to zero. There is no excuse to not get your idea out there and see what happens. You never know.

You’ll note he said “a project like the Glif,” which is a piece of plastic. Bigger and more expensive stuff is obviously harder, but that should not dissuade the clever. Speed, above all, is key in these manufacturing plays.

You can read the rest of the post right here and pick up a Glif over here.